Jenni’s parents have a house in Biddeford, Maine, which means I now have the good fortune of lounging with family, great views and copious lobster.

September 27 – October 2 (Friday-Wednesday) – It was another milestone day as we reached the Atlantic Ocean!  And what a warm welcome, it was: a couple bottles of Sancerre, a lobster roll, the hot tub with great stars, then some late night snacking on chunks of lobster straight to the dome.

Beyaz and us humans were joined Saturday morning by Devin and his two dogs: Louie the huge bull mastiff and Ryder the adorable Nova Scotia Duck Tolling Retriever.  Watching these two play together warms the heart.

After another lobster roll, Alper, Devin and I played some tennis at their club’s Har-Tru court around the corner.  75 and sunny, tennis, a pond to one side and the ocean to the other.  Life is good.  Then it got even better with MORE LOBSTER at night, this time in the shell.  Jenni’s parents bought one lobster for each grown-up and two for each kid, and they were phenomenal.  My wife attacked these crustaceans with a ferocity that was almost alarming, yet I who nearly drank my plate of greenish salt water with lobster slime butter should not judge.  A great Chablis Premier Cru, some fireworks Devin had brought and This is the End (transferred from his computer to a USB stick inserted into the TV, yes this novice is always amazed by technology) capped the evening.

Days in Maine are filled with tennis, wine, cheese, lobster, hot tub, reading and more.  On the court I made solid contact on a ‘tweener but it landed long.  I finished Investment Biker in Vermont and have been reading Delivering Happiness.  As the Giants got whooped yet again, I could focus more on my book.  Much of what Tony Hsieh writes resonates with me and mirrors some of my notions in embarking on this journey.  He was always hard-working and intellectually curious, deeply values his personal relationships and lives by the philosophy that experiences are much more important than material items.  He believes that you can change anything if you make a conscious and deliberate effort to overcome inertia.  I think it was in this book I came across the Kierkegaard quote: “To dare is to lose one’s footing momentarily. Not to dare is to lose oneself.” 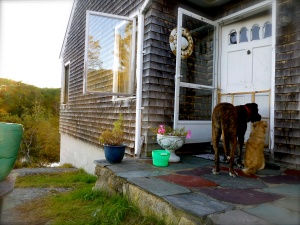 I made fires in the evenings and Alper dubbed me Bodaway, a Native American name for fire maker.  He did so during a brief interlude between sessions espousing the merits of passive solar.  Maine is definitely Jenni’s happy place.  She really likes to converse with the dogs and interpret what they would say in various situations.  She also loves to speak in accents and sing with all her might LeAnn Rimes’ cover of I Will Always Love You.

One day Jenni and I took a long walk on the beach down to the nunnery and then to their friend’s house where we debated the relative merits of being on the beach vs. set back on the hill with more of a view (like her parent’s home).  I believe they call such dilemmas “1% problems.”

The day I drove back and forth to Portland twice, once for a software update at the Apple store at the mall and once to the Volvo dealership after we had to jump-start Sven yet again…well, that was not a highlight.  At least we had more lobster rolls from Pool Street Market (fka Mike’s) which we enjoyed despite the swarming mosquitoes near the house.  The Portland Volvo dealership was very friendly and helpful.  Their best guess as to Sven’s ailment was some gobbledygook about an RDAR software update to prevent the satellite radio tuner from staying on even after the ignition was switched off.  This, despite that we do not have even satellite radio activated.  While it is not clear we have left Sven parked long enough to cause the battery drain since that day, we have not had any more problems.  It is disappointing that the dealers in Chicago and Vermont never addressed this software update.

Our last night in Maine it was just me and Jenni.  We had dinner at Cape Pier Chowder House in Kennebunkport.  We split a bowl of clam chowder that was really thick.  Which reminds me that Jenni is now officially addicted to the phrase “that’s what she said.”  I admit it is a fun game, and called for remarkably often.  Anyway, the chowder was great and the lobster rolls were good.  These are a more traditional version, with a good amount of meat on a buttered, toasted hot dog bun.  My gripe is the mayo and seasoning were too light.  She washed it down with a glass of sauvignon blanc and I with a Shipyard (Portland microbrew) Export draught.  The setting is the quintessential Maine harbor with a lighthouse and many fishing and lobster boats.

By the way, today the US government shut down.  I had my fifth and sixth rounds of lobster, so I was not too sick to my stomach to eat.  And I did feel fortunate that none of our national park visits were affected, yet deeply ashamed of my country.  Imagine if you were a European tourist visiting the US to see our national parks and were turned away at the entrance due to shenanigans in Washington, D.C.  That most certainly is more characteristic of a developing country than a global leader.

On our way out of Maine we stopped at the Cape Porpoise Kitchen which is a deli and gourmet market.  I had a good breakfast sandwich that was like an upscale version of the McDonald’s sausage McMuffin with egg.  More important, they offer a Maine crab and dill havarti sandwich that sounds so good, and they sell Elki bacon and blue cheese whipped mustard.  We continued to have amazing weather on this trip and it was a perfect time to be here.  Still warm enough, beautiful foliage and no crowds.