On Sunday we decided to take an all day tour with enotour, and I am very glad we did so.  We chose this tour because it offered a nice balance of the coastal cities with a winery visit at an affordable price (39k pesos each) in a small group.  Private tours and unemployment make strange bedfellows, and I prefer to avoid 50+ person buses…

I did not realize how many different wine areas are accessible from Santiago, thus deciding you want to do a wine tour is only the first step.  The Maipo Valley is close to the city and where the famous Concha y Toro winery is located.  I believe one could take the train there and then walk, and La Bicicleta Verde is a popular company offering bike tours.  Uncorked also came recommended but their tours are far more expensive.  The Colchagua Valley, Aconcagua Valley and I am sure others are alternatives to the Casablanca Valley where we visited.

Enotour picked us up at our hotel promptly at 9:30 am in a large van with a total of nine tourists, a driver and our excellent guide, Andres.  The group was diverse with passengers from Mexico, Spain, Argentina and Israel (a Birthright executive).  On the way to the coast we stopped at a touristy place to sample chicha, which Jenni noted tastes a lot like apple cider.

Our guide informed us that copper is Chile’s most valuable export, and other majors include agriculture, seafood, wine (with the UK and China the biggest buyers), wood and lithium.

I was quite impressed with Valparaiso.  The colors are so vibrant, both the structures themselves and the ubiquitous street art in the roads and alleys covering the hillside.  There are several funiculars and we took one up to the fine arts museum. 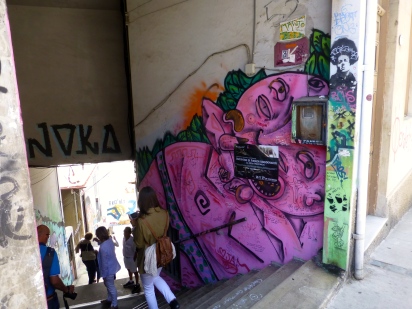 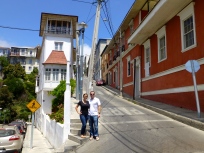 Valparaiso was a major international port and commercial center, particularly before the devastating 1906 earthquake and opening of the Panama Canal which diminished the importance of being the last big port before Cape Horn.  This is less true today, but it remains a tourist destination owing to its history, architecture, bohemian character and nearby surfing.  Some homes are wood but covered outside with zinc plates to protect against the elements.  Cats are all over.  I believe Lautaro Rosas is a high-end street, and the Hostals Casa Valparaiso and the Casa Aventura seemed well-located.  The Palacio Astoreca is a boutique hotel with the Alegre Restaurant.  A brief tour was a treat, and I think this area merits a night or two. 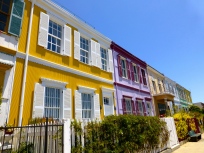 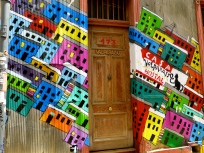 From Valparaiso we drove a short way to Vina del Mar, which is more modern and home to Chile’s first casino.  Valparaiso is often compared to San Francisco, and Vina would be more akin to Miami (though much slower paced) with its condo towers lining the beach.  There is a Sheraton Hotel and Convention Center with a nice terrace on the water, just outside the central city area.  Horse and carriage rides are available, with a concentration between the casino and the river.  We saw the Reloj de Flores and outside the Museo Fonck sits one of only four Moai in the world not on Easter Island.

Moai at the Fonck

There are a couple well-regarded universities in the area.  Andres explained these are expensive, with tests taken at the end of high school determining what school you can attend and how much of the cost will be government-funded.  He also said he lives in Vina and commutes by bus every day to Santiago to lead tours.  I am inspired by these stories of hard work.  As we began the drive back to Indomita Winery, Elton John played.  Every time I hear Your Song, I think of Eric singing it to Jen at their wedding, and this makes me happy.

It was about 3 pm when we arrived at Indomita Winery, so be sure to take a snack if you do this tour as lunch will come very late.  The nine tourists sat together and enjoyed good conversation (mix of Spanish and English), wine and food (my salmon was great) backed by live saxophone.  I was very pleased with our group.  The Spanish family travels a lot and interestingly offered several recommendations for US national parks.  The winery is a modern white and glass building on a hill with great views over the vineyards and valley.

After a long lunch, the wine tasting included in the tour began.  Most of the group sat in a nice room, while Jenni and I were relegated to the front patio as the only two requiring English.  Score another for the ethnocentric, monolingual Americans.  Our punishment was an outdoor, private tasting.

First was a white blend of late harvest Gewurtztraminer and sauvignon blanc.  Next a pinot noir that I liked a lot.  Our pourer explained that pinot is sort of in between typical white and red, hence it is known as the Michael Jackson of wines.  We finished with a leathery cab.   I had high expectations as I recall years ago Streiff told me that his parents enjoyed their trip to Chile and its wine, and those Streiffs know travel and wine.  I was not disappointed.  It was a great day and I hope to return one day to visit more of Chile’s wineries.