Kochi (or Cochin) is a coastal city in the state of Kerala and a popular destination for tourists.  We spent three nights and two full days here and found it to be a nice mix between city and village feel and a great place for easing into India.

It did not take long to get our first taste of the brutal Indian traffic when our modern airport public bus took more than two hours to reach Fort Cochin.  Spacious and calm enough to start, the bus quickly became very crowded.  Though nothing like the older, regular public buses.  On the way we passed countless Bollywood billboards and crossed Ernakulam, which is the more modern and big city part of Kochi.  Most visitors stay in Fort Cochin which occupies the western peninsula along with Mattancherry, and I recommend you do the same.  Unless perhaps you stay at the Taj on Willingdon Island. 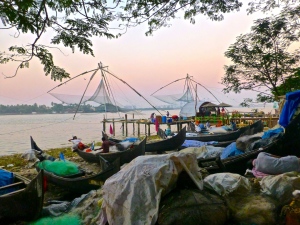 After checking into our spacious room at Chiramel Residency, we had dinner at Dal Roti, a very popular and cheap restaurant that happened to be next door.  The butter chicken was tasty and we had our first of many parathas, the doughy delicacy we fell in love with on our honeymoon.  Albeit the versions we’ve had in southern India have been a little larger and more fried.

Eager to explore a little, we walked over to a bar and met a few locals and their adorable puppy named Blacky.

Whenever we tell people we are from America, one of the first things they say is “oh, winter, it’s really cold, yes?”  Then we get to chuckle and say “not in Cali.”  And Obama may not be that popular in the US, but he is here.

Tuesday was mainly a work day, planning out some more of our time in India, getting my SIM-switched iPhone to function, etc.  It is shocking how inexpensive medicine is here vs. in the US.  Jenni has had sinus problems for a while so we bought a 3-pack of Zithromax for…$1.  In the early evening we walked over to see the Chinese fishing nets and the area was crowded with locals and tourists.  We split Malabar prawn curry and a great mango lassi for dinner at the Old Courtyard. 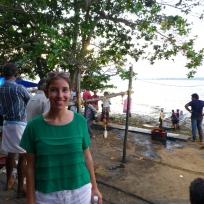 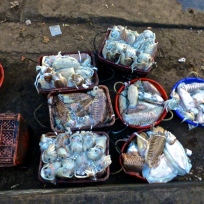 Wednesday we planned to walk all day but had barely escaped our hotel when an enterprising tuk-tuk driver scooped us up with promises of a good tour for Rs 60/hour.  Our first stop was Saint Francis Church, the first built by Europeans in India.  It is historically interesting and Vasco da Gama was buried here before his body was later removed to Portugal, but the structure itself is nothing special. 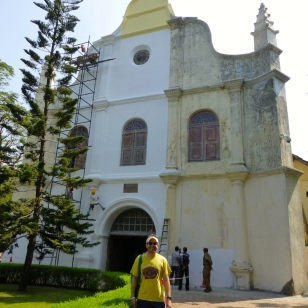 The Santa Cruz Basilica is a far grander church.  Next we saw the pretty Dutch Cemetery before continuing to the dhobi khana where laundry is hand-washed by members of a low caste. 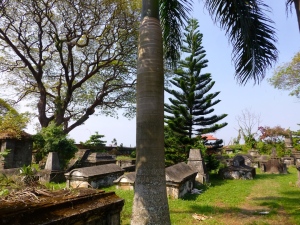 This was a fascinating stop for a glimpse into a long-standing practice that is probably going the way of the dodo in the coming years/decades.  Women and lungi-clad men scrub garments and linens before whipping them onto rock surfaces, the precursor to our spin cycle.  The cloth is then air dried by hanging between rope braids and finally it is ironed, folded and sorted.  While we saw a few jury-rigged electrical irons, many are heated by burning coconut husk.  This method requires more skill to maintain the proper temperature.  Either type weighs about 20 pounds. 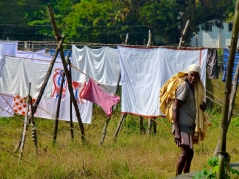 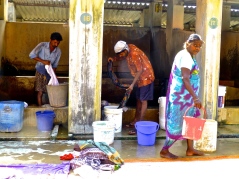 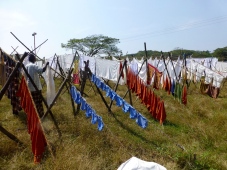 From here we crossed to Mattancherry and saw the old Jewish synagogue which was impressive.  It is small but ornately decorated with hand-painted blue and white tiles, colorful lamps and a red and gold Torah ark.  At one time there was a substantial Jewish population here but most emigrated to Israel in the 1940s, when they left behind furniture and other large possessions that ended up in antique shops in the area.

Our guide definitely added value by taking us to the Jain Temple for the 12:15 pm pigeon feeding display.  A guy claps his hands and the pigeons circle and then descend to eat seeds he scatters.  They believe it is good luck for a pigeon to eat from your hand.  Jenni did that while I got crapped on, so we covered our cultural bases.  Also, a woman inside the complex gave us a quick tour where we understood maybe 5% of her words, most of which came at the end when she held out her hand and said clearly “OK tour is done, you tip now.” 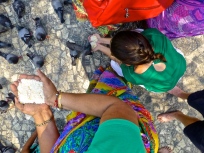 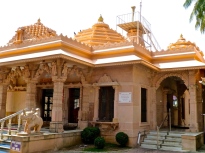 For lunch we considered Kayee’s and its Rs 100 chicken biryani but the atmosphere was lacking so we opted for a water-side meal at Seagull.  The chicken biryani there was quite tasty. 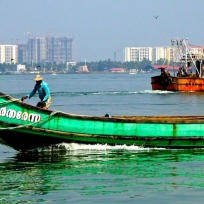 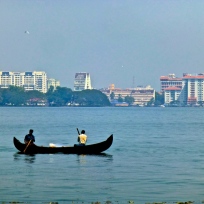 After lunch we visited a spice warehouse with turmeric, cardamom, nutmeg, cinnamon and star anise, and then we saw a ginger seller.  This was neat as our guide pointed out where they dry the ginger a bit before soaking it with chalk and lime (the fruit) then drying it a lot, after which it lasts 7-8 months.  The contrast of the monochromatic ginger pile and art-covered courtyard walls made for a nice scene. 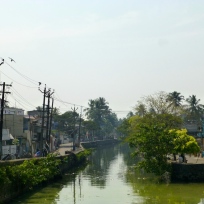 Our last stop on the tour (aside from buying some wine, for our backwater trip, through the bars at a government shop) was the Dutch Palace, which was actually built by the Portuguese though the Dutch augmented it.  It is bland from the outside, but holds some impressive mural paintings along with a smattering of palanquins and old weapons.

The packy (shout to my Baystaters)

Kerala is known for its kathakali theater performances.  We caught a 5 pm show at the Kerala Kathakali Centre.  Though a tad slow at times, overall it was superb and a highlight of our stay.  The main show began at 6 pm, but attendees can arrive at 5 pm to watch the elaborate make-up process.  These gents paint their faces using all natural ingredients, generally different stones grated with coconut oil.  And the emcee was masterful hand-sprinkling sand into geometric shapes on the floor right by our seats. 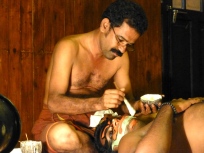 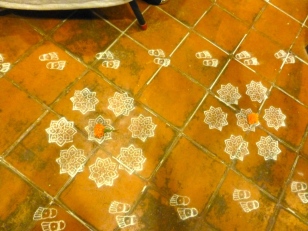 In Kathakali there are no words, rather elaborate eye and facial expressions along with hand movements are used to communicate.  The pre-show included a demonstration of techniques and live percussion accompanied the show.  Traditional performance in villages can last an entire night, I think we saw the equivalent of one act in a play.  The Kerala Kathakali Centre offers a host of other programs, too, such as yoga, music, martial arts and more. 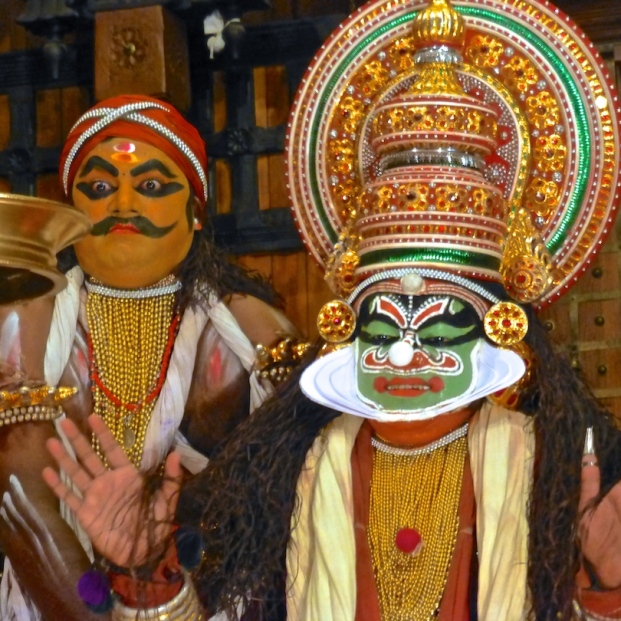 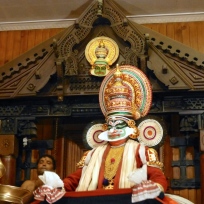 After the show we ate at Malabar House, an upscale boutique hotel with a courtyard restaurant.  I enjoyed the Lamb Kerala we split.  It is not the best value, but when you can have live music in an appealing setting and pay $11 for a lamb dish it’s hard to get too upset.

The exchange rate was about 62 Indian Rupees per 1 US Dollar.

US citizens require a visa prior to arrival.  It is a fairly cumbersome and expensive process.  We worked with Travisa and paid up for 10-year multiple entry visas so we can come and go as we please.

Most accommodations double as a travel agent of sorts and can at least arrange local tours and transport if not more.

Communication: India has become much stricter since the 2008 Mumbai terror attacks so purchasing a SIM card required a copy of our passports and visas, submission of passport photos and a little waiting.  We had to fill out a lengthy form and provide a local address.  Then we had to dial a number and verify our name, father’s or husband’s name and local address.

We purchased Airtel SIM cards at Shop n Save on Princess Street in Fort Cochin.  They were helpful and made the photocopies for us.  We paid Rs 399 which covered the connection fee plus value on the card, and it was easy to refill the cards there and should be elsewhere, too.

WiFi is widely available though connections have been slow.

Transport: After hearing a pre-paid taxi would cost Rs 990, we took one of the nice, orange AC buses from the airport for Rs 76 each to Fort Cochin.  Once there, we walked or used tuk-tuks which are everywhere in India.  Private cars can usually be arranged with ease and of course are much less expensive than in the US.  For example, getting from the backwaters to our hotel past Munnar we paid Rs 10/km (though at least on this route we had to double the count, i.e. for the driver’s return), which equated to Rs 3,400 for a 5+ hour trip.

There are lots of buses and trains, and conventional wisdom is that the train is a much more pleasant experience.  We also have multiple internal flights planned.  In addition to all the usual sites like Kayak, www.makemytrip.com may be a good resource.

Accommodation: We stayed at Chiramel Residency, an old heritage home stay near the Parade Grounds.  Our room cost Rs 3,000/night and was very large with high ceilings, beautiful hardwood floors and good AC.  A basic American breakfast was included.  The living room was beautiful and the staff friendly and helpful.  I liked the location a lot.  www.chiramelhomestay.com , 1/296 Lilly Street, Fort Cochin

We also considered Delight, Walton’s and Bernard Bungalow.  Around the corner from Chiramel is the Malabar House where we dined one night.  This Relais & Chateaux boutique hotel seemed lovely.  Brunton Boatyard is another more high end option.

Attractions: Check opening times because, e.g., the synagogue is closed daily from 12-3 pm.  Entrance fees were negligible, usually Rs 5-10.  Photos are not allowed inside the synagogue, the indoor parts of the Jain Temple or the Dutch Palace.

Our hotel booked the kathakali show for us and secured seats 7-8 in the front row.  This meant a little neck-craning but was the best vantage point for make-up and the sand painting.  Tickets were Rs 300 each.  There are a few other places in town that also have performances.